Uzaki-chan Wants to Hang Out! Season 2 Opposites attract. But in the case of Sakurai, who prefers to be alone with himself and his thoughts, this does not work. A hurricane named Uzaki Hana burst into his life. Now the lonely guy gradually turns into a different person. But his newly-made friend is either sympathetic to him or incredibly annoying with her behavior, loud voice, vivid emotions. What is the guy to do now?..

The genre is a romantic comedy.
The number of episodes is 12.
Season 1 premiered on July 10, 2020.
The original name of the anime is Uzaki-chan wa Asobitai!

Summer 2020 turned out to be full of various anime novelties. The long-awaited premieres have captured the attention of the audience. And an adaptation of “Uzaki-chan Wants to Hang Out!” was no exception. The audience was delighted with the series: an easy plot, understandable humor, funny ridiculous situations that the protagonist finds himself in because of the actions of his new friend… At the same time, young Uzaki first makes us hate her because of her behavior “on the verge of a foul”, then fall in love with her.

Now for many anime fans, the Sakurai-Uzaki couple has become a kind of “drug”. Viewers are looking forward to new episodes. Unfortunately, there is no official confirmation of the release of Season 2 yet, but anime critics are confident that fans will most likely see the continuation of the story by the end of 2021.

Hana Uzaki spotted a handsome tall guy named Shinichi Sakurai back in high school when they both went to the school pool. Uzaki, the owner of a lush chest and short stature, never had a complex about this. She was always in a good mood, perky and cheerful. Perhaps it was this set of physical and emotional characteristics that allowed the guy to remember Uzaki.

During her first year of college, Uzaki watched the life of a 2nd year student. Surprisingly, Sakurai did not communicate with his peers, dined alone, and during the break he played a portable console or just slept. And it’s all? No fun, communication and laughter? Who is he, this loner with a frown? 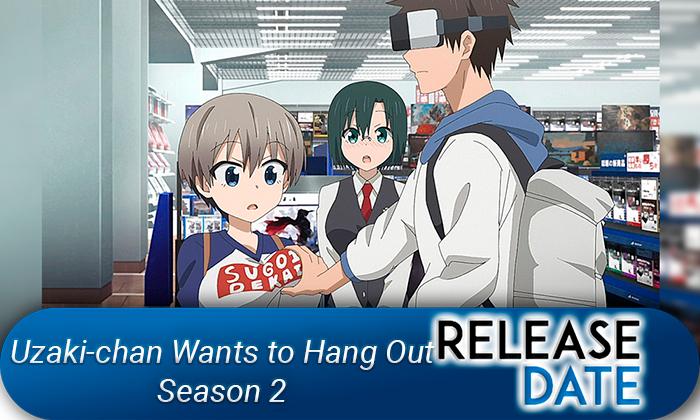 An awkward moment the main characters got into

One day, a noisy and cheerful Uzaki decided to take patronage over Sakurai. She felt that she was obliged to accompany the guy everywhere, communicate with him, go to the cinema and cafes. But the girl completely forgot to ask herself the question: is it necessary for Sakurai himself?.. Nevertheless, the main characters gradually begin to draw closer, communicate a lot with each other. Who are they now – friends or a couple in love?..

Top 10 Anime That Are Guaranteed To Make You Laugh (ft. Todd Haberkorn)